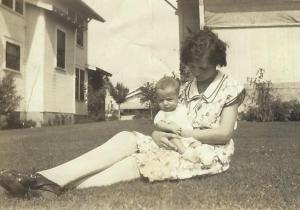 My father said he had no memory of his mother, none that is, except for one very vague, shadowy memory of being held by a woman who was standing at a stove, cooking something. He was the third of what would eventually be five children. His mother was seventeen when he was born.

Alice Eugenia Farrar liked to write poetry. She never finished school, though, because she was forced to marry her teacher when she became pregnant by him. Her husband, Austin LeGrand Piety, protested in a letter to one of his children that he had not seduced her. He was twenty-seven when they married. She was fifteen.

Fifteen is too young, of course, to begin having children. Five children in rapid succession ruined her health. She contracted tuberculosis and was sent to the Arkansas State Tuberculosis Sanatorium when my father was still a toddler. Her husband was unable both to earn a living and take care of five children all by himself, so he deposited them in the Working Woman’s Home and Day Nursery in Little Rock. That was sometime in 1934 when my father was three years old.

As far as I can make out, he never saw his mother again. She had brief periods when her health improved, but she never fully recovered. She died of tuberculosis when my father was twelve. He told me several times that I looked like her, but that judgment must have been based on photographs rather than memory. We had a few photographs of her when I was a child. I didn’t know they were photos of her, though. I didn’t know who the subject was. They were just old photos of someone I didn’t know.

My father never talked about his mother when I was a child because he had no memories of her to share. I didn’t even know her name until I was in my thirties. It just never came up. She must have been a very good mother, though (an impressive accomplishment for someone who was herself still a child) because all her children turned out well. And by “well” I don’t mean they became successful professionals, though they did. I mean they were kind and caring people, sympathetic and empathetic with developed social consciences. Research has shown that the first two to three years in a child’s life are crucial to its development, more crucial, perhaps, than any subsequent years. A child who isn’t held enough, during this period, who isn’t nurtured and coddled enough, cooed over and talked to enough, will not develop normally in an emotional sense (see, for example, Hildyard and Wolfe, “Child neglect: developmental issues and outcomes”). I don’t mean to suggest that it is impossible for children who received insufficient attention in those crucial early years to develop into happy, well-adjusted adults. I don’t know that that is something anyone could ever know. What we do know, however, is that achievement is more difficult for them.

Alice Eugenia Farrar Piety must have been an extraordinary person. It is almost impossible now, however, to learn anything about her. There is no one alive anymore, so far as I know, who knew her when she was alive. Among my father’s papers, there is one heart-rending letter from her to her sister-in-law begging that her children not be put up for adoption.

She doesn’t look poor in the photo at the beginning of this piece. She looks, in fact, very middle class, sitting in the backyard of a nice middle-class house, coddling a baby that her apparent age suggests she is looking after for someone else. She isn’t the child’s baby-sitter, though, she’s its mother. No one even knows anymore who the child in the photo is. The writing on the back reads simply “Alice with one of her babies.” The photo was likely taken early in her marriage, before her husband’s pay was cut in half, before he began to lose one job after another.

The photo here, of my father and his two older brothers Philip (far left) and Louis (middle), gives a better idea of Alice’s material circumstances after her marriage and repeated pregnancies. One can just glimpse a portion of their house in the background.

James Agee wrote in Let Us Now Praise Famous Men that the inability of the share croppers he studied to control how many children they had was one of the main reasons they were unable to work themselves up out of poverty. How many people, men as well as women, have been forced into marriages simply as a result of the fact that they could not control whether they would have children if they had sex? How much alcoholism, drug addiction, and child abuse can be traced back to unwanted pregnancies? How much violence more generally can be traced to anger at feeling trapped in a life over which one has no control?

How many women’s lives have vanished, like Alice’s, because they became mothers too young?

My father was adamant about continuing his monthly contributions to Planned Parenthood, even when, late in retirement, he could ill afford them. I never asked him if this was in part because of his mother. It seems to me now, though, that she has to have been there, in the back of his mind, the shadowy figure, balancing his tiny form on her hip as she stood at the stove.

(An earlier version of this piece appeared in the 11 May issue of Counterpunch. I had erroneously indicated that Alice’s age when she married was thirteen. That was what my father had told me. My cousin Timothy, one of Louis’ children corrected me, however. He calculated Alice’s age when she married based on her birthday on her gravestone and the year his father, the oldest child, was born.)